– a tool to track how news get covered (project from Berkman Centre)
CNN is one of my news source, both tv and online. On tv they often mention iReport, the reports from users all over the world. I was talking about citizen reports in one of my earlier blogs and last month CNN had 900 reports uploaded to their site.

To keep track on news can be an ambitious project. Rss or similar feed system give you an overview of your selected sources, but personally I have too many sources in my rss that seem to cover each others topics and stories. Some of the sources may not be necessary but it will take time to compare.

That is why I think the idea of Media Cloud is an interesting service to help you compare media sources. This will make it easier for you to choose the most interesting source that cover your needs.

Media Cloud is a system (set of data and tools) that compare news from blogs and newspapers (english) from around the world. The system keep track on the content in every story (pull the story text out of the HTML) and automatically builds an archive of news stories and blog posts. The result is visualized based on 1) The top 10 most mentioned terms for each media source 2) the most mentioned terms for each media source that occur most frequently in stories along with your specified search term like ”Obama” 3) A world map of each media source indicating the coverage of those countries. It´s possible today to compare up to three different media sources. 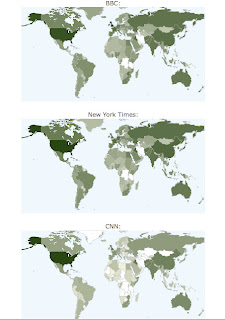 This is an open-source project and in an early stage. At this point 1500 media sources is available today. The search abilitiy – and the selection of sources covering the world feels limited today. I was looking for newspaper covering Japan and China for example but there were just a few choices.

The search results
I compared BBC, New York Times and te Guardian Blog, wrote the term ”Madoff”. For New York Times the terms ”security” and ”wallstreet” is most common, while BBC and the Guardian blog the terms ”united states” and ”united kingdom” appears in the top 3 terms. 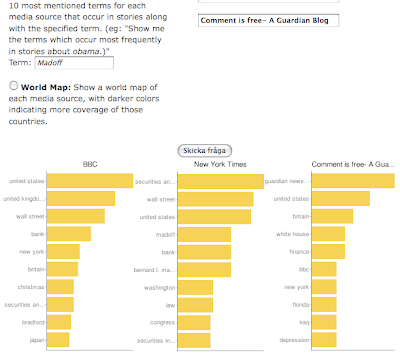 Sometimes the search result can be a little confusing. I was comparing New York Times, Reuters, MSNBC and ”social media”. The outcome was very different and in this case I didn´t understand how- and what the given terms was based on. 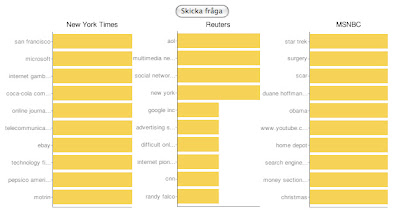 This is the beginning, but I think the idea is very useful both for professional- and ”private” researchers.