A threat or a source?
The modern form of ”citizen journalism” goes way back but was a hot topic until the middle of the 21st century. Even though it´s a fact that everyone, armed with a mobile phone or a digital camera and happens to be in a ”newsworthy” situation, has got huge power, this is still not fully approved by all journalists.

TV4:s (Sweden) initiative of using regular people for local reportages with mobile phones is not about replacing journalism (started in January). This is a smart way of using common people´s local knowledge. The quality and the objectiveness of stories and material is depending on the level of engagement from the people and a way of cooperating with the media.

”BBC hits all-time record high with 42,000 user submissions during heavy snow” This article is about the user generated content during the heavy snowfall in the UK last week. ”It is not about citizen media content overwhelming the journalism” said Peter Horrocks, head of the BBC newsroom, explaining that user generated content is very much seen as a source, rather than a replacement for journalists gathering their own material.

The level of engagement and cooperation
Photos, microblogging, professional blogging or articles are different ways of contribute. In the above example from BBC News, peoples submissions were ”integrated into” journalists coverage.

One example of the power of citizen journalism is OhMyNews (South Korea, 2000). The founder Oh Yeon-ho says ”our concept is every citizen can be a reporter.” Around 200 stories are published every day with the help from around 30 000 registred citizen journalists. Editors who are working for OhMyNews are checking the relevans in the stories before publishing. Estimated number of visitors an average day is 2 million people. 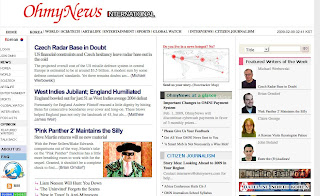 Until recently every person got paid for their articles for OhMyNews, but now their reward system is changed. I don´t think this will change the good will of contribution. To share your photos, comments or stories from every corner of the world is a natural behaviour of people today (an unstoppable). The money is not always the most important thing but the importance of engagement and interest.

Related article about Citizen Journalism
”A new era for journalism”
(Former Globe editor and is the author of ”Couch Potatoes Sprout: The Rise of Online Community Journalism”)

One thought on “Every citizen IS a reporter”