The 15 most popular sites on the list have remained since December but in general all sites have experienced losses. In general Google and the portal Onet.pl loose visitors in favour of the popular Nasza-Klasa ”Our Class”, is the most popular social website similar to Facebook where you can find old friends from school. The most used instant messenger tool on the polish market is Gadu-Gadu with 2 900 000 user. Comparing to MSN Messenger where you find on the 17th place.

Communities like MySpace and Facebook is listed on 13th and 17th place on a ranking list where both internet portals and social networking sites were listed. Golden Line (16) with 700 000 users is most used for professional network compared to the international network LinkedIn (not on the list). 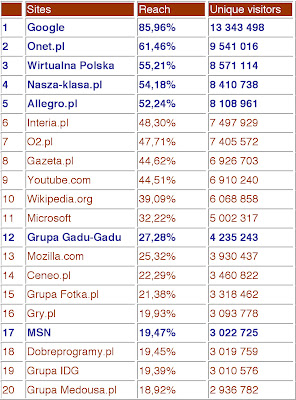 Polish actors is more popular than international in general. During last year MySpace tried to raise popularity on the Polish market but didn´t succeed (Ranking list by month, december -08).

Google is number one, then without ranking comes Onet, Wirtualna Polska – Virtual Poland which is one of the largests portals for news/information, Gazeta, owned by the news publisher Agora (Gazeta Wyborcza is a daily newspaper), Whitelines.net guides you to the popular search engines for most countries and offers links to promote your website URL.